This page gives an overview of the post-processing steps that were applied in generating the flux product FP2021.

This is the first PI dataset for CH-LAE. The dataset was released on 8 Jun 2021. The release-candidate-1 of the dataset was made available on 18 May 2021 and approved on 3 Jun 2021. The final FP2021 was presented and further discussed on 22 Jun 2021 (approx. 12 participants). Fluxes used in this dataset were uploaded to EFDC / FLUXNET on 9 Jun 2021 (for more info, see below in section Upload for FLUXNET / EFDC Data Sharing).

Links to references are given at the end of this page. 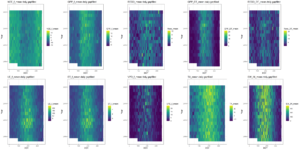 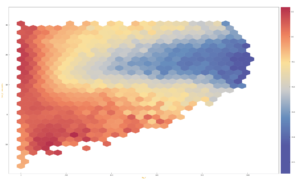 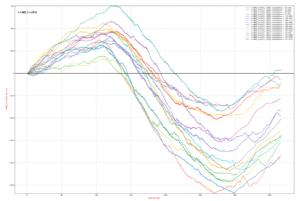 Level-1 / Collection: The most recent Level-1 fluxes for all IRGAs were collected.

Step 1: Separate for each IRGA dataset

The open-path IRGA at CH-LAE was mounted in an inclined position. The self-heating correction in EddyPro (Burba et. al., 2008) can therefore not be applied since it was developed for vertically mounted sensors. Here we describe the approach how open-path fluxes at CH-LAE (2004-2017) were corrected, following Kittler et al. (2017) and Järvi et al. (2009).

For CH-LAE, we had a time period of approx. 20 months of parallel IRGA measurements available, during which the CO2 flux was calculated for both the open-path IRGA75 and the enclosed-path IRGA72. A comparison of the fluxes of the two instruments showed a significant difference in calculated CO2 fluxes. For CH-LAE, this difference can be corrected following the approach described in Kittler et al. (2017), based on Burba et al. (2006). 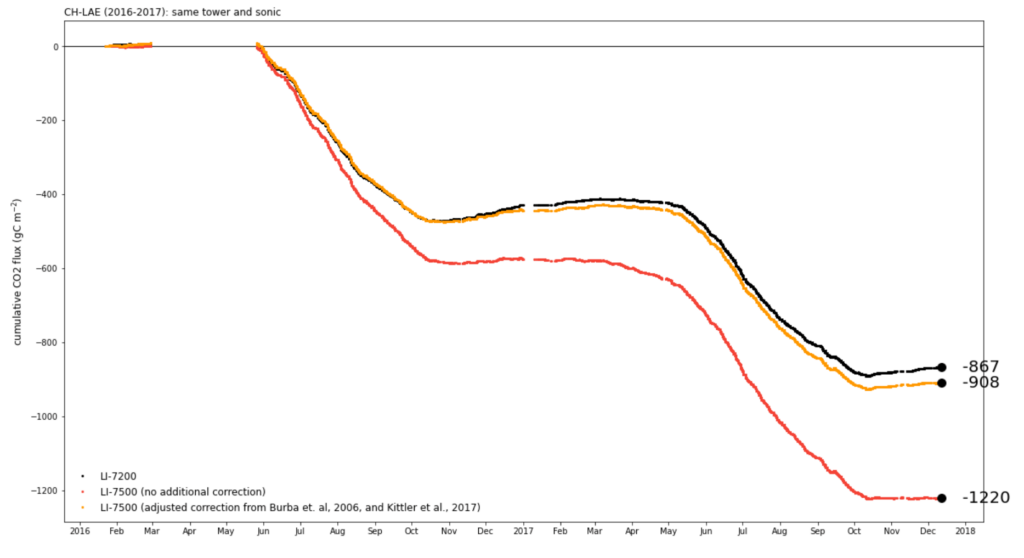 Figure A shows the cumulative CO2 flux (gC m-2) calculated from the open-path IRGA (LI-7500) and the enclosed-path IRGA (LI-7200) during the time period of parallel measurements between 2016 and 2017. The red line shows LI-7500 fluxes after full processing (including WPL correction), but without self-heating correction. The orange line shows the same LI-7500 fluxes, but corrected for the self-heating using an approach based on Kittler et al. (2017). The black line shows concurrent fluxes measured by an enclosed-path analyzer which is not affected by the self-heating and was therefore considered the “true” flux. Figure A is based on high-quality fluxes (quality flag = 0, best).

The correction was done by adding a scaled flux correction term to the calculated open-path fluxes, simplified:

The calculated flux refers to the LI-7500 flux after full processing (including WPL correction and quality control), but without self-heating correction. 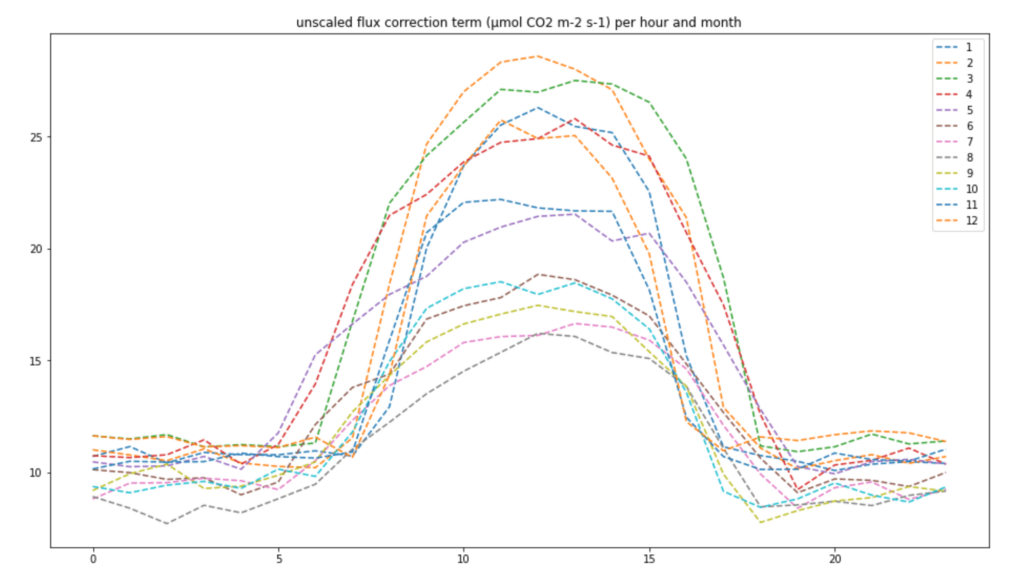 The scaling factor determines how much of the (unscaled) flux correction term is added to the calculated flux that needs correction. For CH-LAE, we found a nearly linear relationship between the scaling factor ξ and ustar (friction velocity). Therefore, ξ was optimized in 20 classes of ustar, separate for daytime and nighttime, using a least squares method (bootstrap with replacement) to find the best agreement between LI-7500 and LI-7200 fluxes between 2016 and 2017 (time period of parallel measurements) (Figure C). 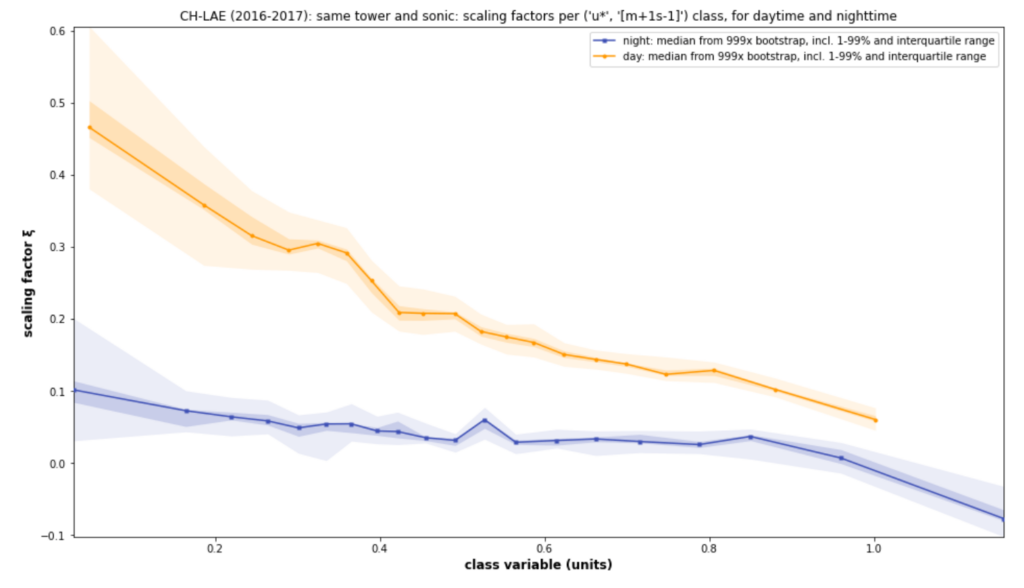 Figure C The scaling factor in 20 classes of ustar, separate for daytime and nighttime, calculated from the time period of parallel measurements (2016-2017). 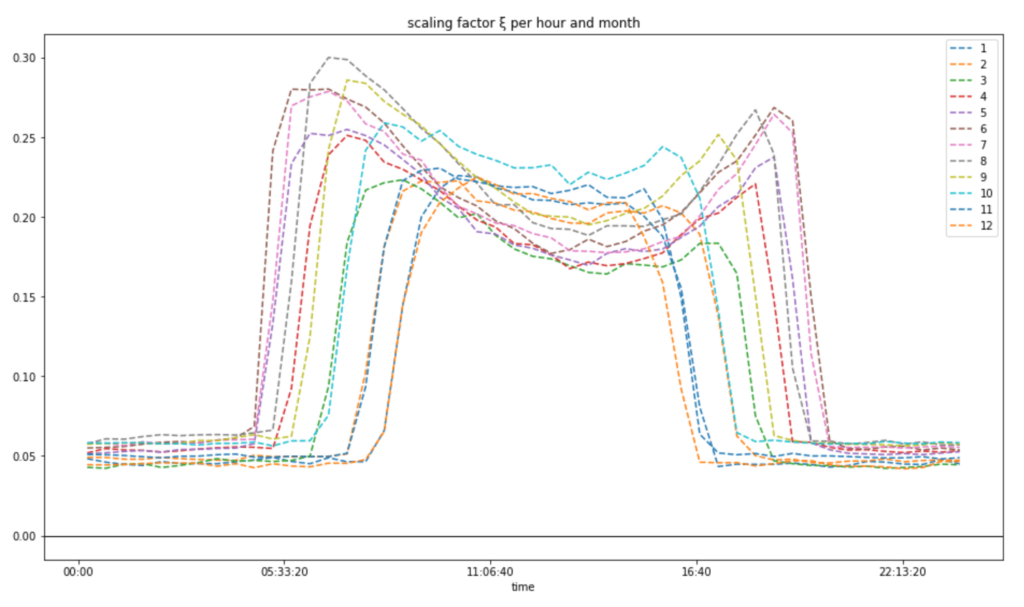 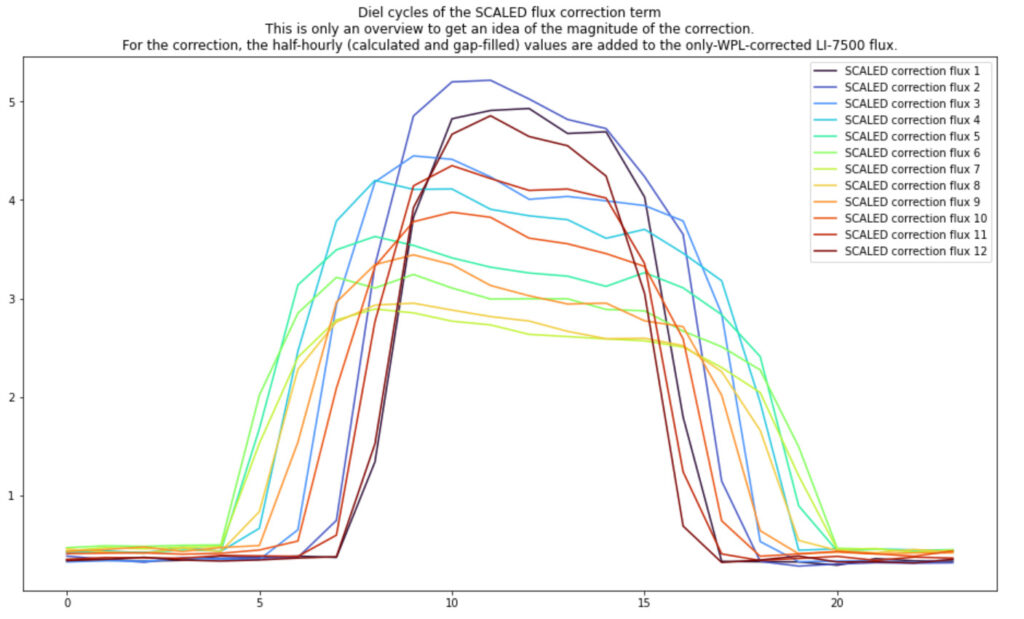 Here is an example of how the correction following Burba et al. (2008) and using EddyPro performs in comparison to the selected correction method. The plot was generated during a different run than the plots shown above, which is why the numbers are slightly different.

Figure F shows the cumulative CO2 flux (gC m-2) calculated from the open-path IRGA (LI-7500) and the enclosed-path IRGA (LI-7200) during the time period of parallel measurements between 2016 and 2017.

Figure F is based on high-quality fluxes (quality flag = 0, best). 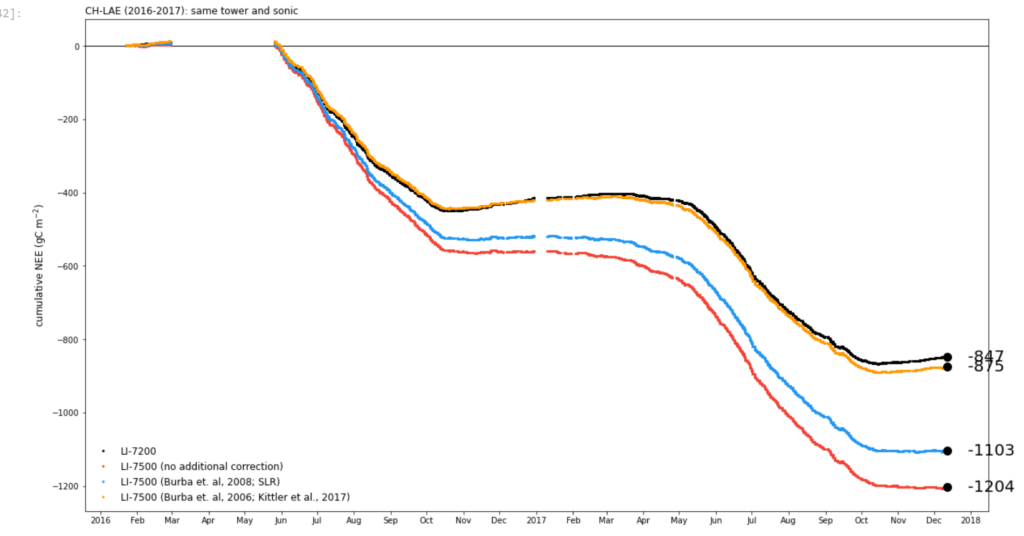 Figure F Comparison of the the selected correction method and results from EddyPro (cumulative NEE in gC m-2 between 2016 and 2017). The blue line shows the correction as it is currently implemented in EddyPro (for vertically mounted sensors).