The default SFN (Swiss FluxNet) processing chain from raw data to final flux products. Recent updates are listed at the bottom of this page. 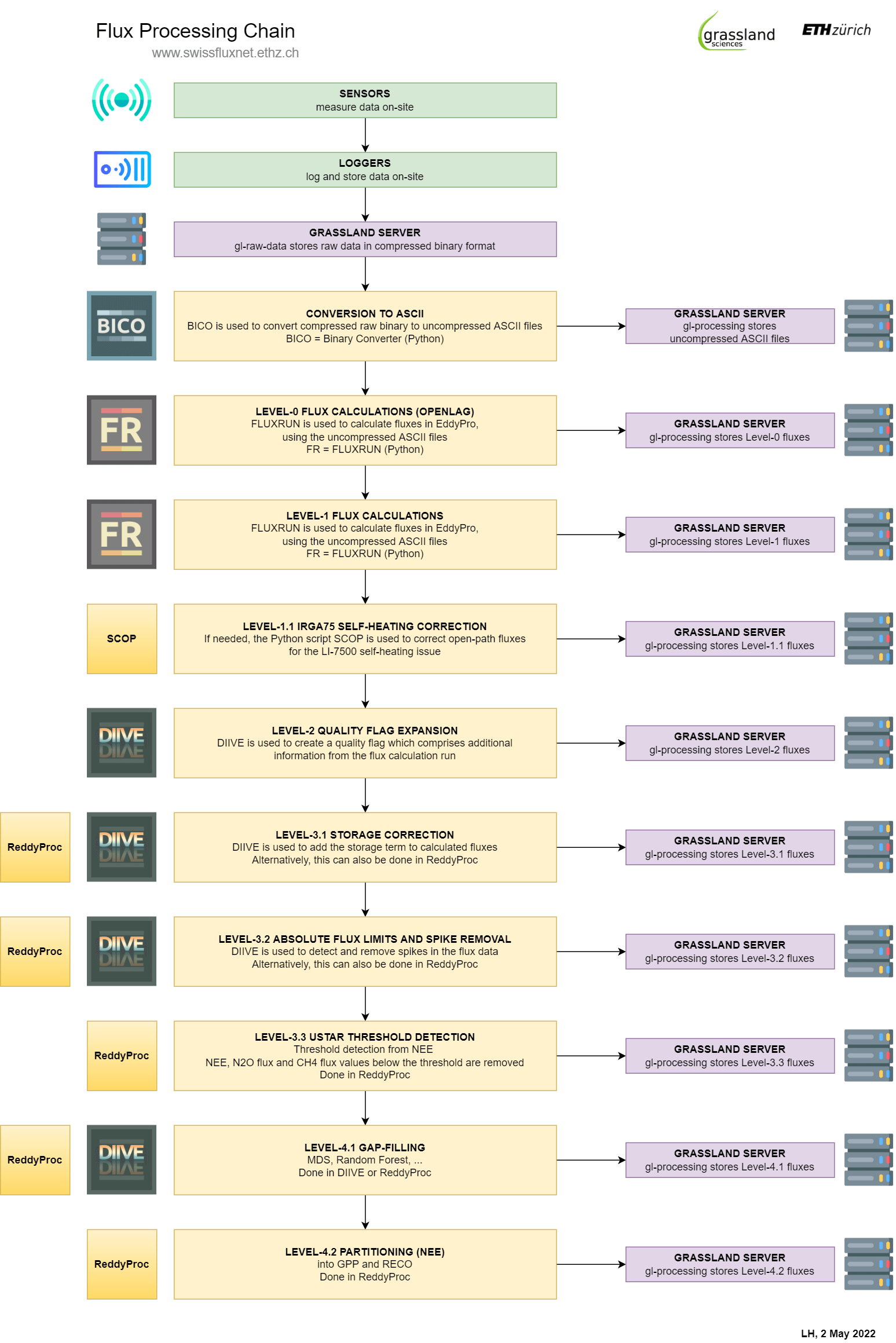 Step 2 | Level-0, Preliminary Flux Calculations With OPENLAG and Other Tests

Basis for Level-1. Level-0 means “what you do is up to you”. No rules here. These fluxes are calculated throughout the year, on-demand by the SRPs (site-responsible persons). Mainly used to check in on the site, e.g. if data are complete, if fluxes look plausible etc. Calculations are less strict than Level-1, e.g. the time window in which the lag time is searched is often much larger (10s+) without default time lag to check if the lag is still found as expected (OPENLAG). This information of lag times can then be used in Level-1 to narrow the time window to a more plausible range (typically 5-10s, or even lower for open-path IRGAs). Also, some settings might still not be final, e.g. some instrumet settings (vertical separation of the IRGA) and to shorten calculation time the spectral correction might be set e.g. to Moncrieff et al. (1997), which is faster than e.g. Fratini et al. (2012) that is used for Level-1 calculations for some sites (IRGA72). Level-0 fluxes are currently calculated by the SRPs on their respective RDSnx (on-demand).

Basis for Level-2. Strictly speaking, these calculations are independent from Level-0, but insights from Level-0 are used to improve Level-1 calculations, such as “Is the defined time window for lag search appropriate?”. These calculations make use of an additional input file that contains 6 meteo parameters (TA, PA, RH, SW_IN, LW_IN, PPFD_IN) that can be used to improve flux calculations. Note that after Level-1, calculated fluxes for (en)closed-path IRGAs (e.g., LI-7200) do not change anymore. For open-path systems (e.g., LI-7500), fluxes might need to be corrected for sensor self-heating (see Step 4).

Important: The off-season uptake correction as implemented in EddyPro is never used in our EddyPro open-path flux calculations, since this implementation was developed for vertically mounted instruments and our IRGAs have an inclined sensor mounting. We also found that the EddyPro correction performed poorly when comparing corrected open-path fluxes to concurrent (en)closed-path fluxes.

Required data:
– Level-1 flux calculations from open-path IRGA that needs correction (e.g., LI-7500), and concurrently measured fluxes from a closed-path IRGA (e.g., LI-7200)
Result: Corrected fluxes that can be used in the next processing steps
Done by: PI, SRP
Software: Recent corrections for the forest sites CH-LAE and CH-DAV were done using the Python script SCOP.

Important: USTAR filtering is NOT part of the Level-2 quality flag.

The USTAR filtering is not applied to H and LE, because it has not been proved that when there are CO2 advective fluxes, these also impact energy fluxes, specifically due to the fact that when advection is in general large (nighttime), energy fluxes are small.
From: Pastorello, G. (2020). The FLUXNET2015 dataset and the ONEFlux processing pipeline for eddy covariance data. 27. https://doi.org/10.1038/s41597-020-0534-3

The flowchart has been designed using resources from Flaticon.com: